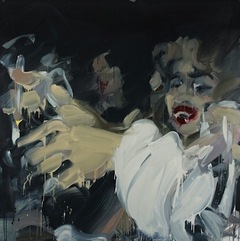 Laura Lancaster makes seductive paintings from found snapshots, showing people and places she does not know. The anonymous figures in these works are rendered even more obscure by the welter of brushstrokes that cover them like swaths of bandages, through which only glimpses of eyes and mouths can be seen. Dracula, 2014, shows what appears to be a young boy, perhaps wearing a mask, standing in front of thick foliage. Another figure in Untitled, 2014, is plastered in white marks, like a fattened version of the Invisible Man. The subjects of her paintings are adrift, their identities irrevocably lost, allowing Lancaster to bury them in the act of painting. Her skill in doing so gives her work fascination and value as it takes on a baroque lusciousness that contrasts with the oftentimes monstrous and generally perplexing subject matter.

Lancaster’s earlier paintings from 2001 are photographic in appearance and small in size and resemble oil sketch studies. The larger canvases of her latest paintings have allowed a great deal more freedom with effect—the broad strokes and drips of the painting Contact, 2014, for example, suggest the unguarded carelessness of the photographic source. One thinks of the photo-paintings of Gerhard Richter, particularly his townscape paintings, but the result is more the model of painterly autonomy provided by Georg Baselitz. (Lancaster’s surfaces look a little like Baselitz’s recent homage paintings to de Kooning.) The harshness of her subject matter, derived from the unguarded snapshots that she uses as source material, suggests a more distant connection with Expressionism, above all to the late works of Lovis Corinth, with their wild yet unerringly accurate stabs of paint.

A series of paintings made in 2013, “Conversations Behind Glass,” took photographs of gravestones as source images. The artist has also copied inscriptions on the back of the photographs, often pathetic in sentiment and with poor grammar. Beneath the vivid, luscious structures of paint marks there is a feeling for human frailty, an empathetic sensibility that reaches further into the act of painting than Lancaster has before.